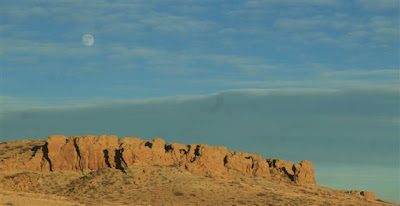 Rock formations east of Shoshonie, Wyoming on way to Casper.
Tuesday afternoon my wife and I headed to Casper where yesterday morning I got to go to the surgery center at the Bone Doctors offfice where I was put out for about 10 minutes while they pulled out the hardware in my heel and then into a boot cast which is actually heavier than the cast I had on but it is removable. And that is a plus while sleeping. The fun part will be monday when I start physical therapy. I was given a prescription for pain pills but so far-knock on wood-I haven't needed them. I hear I will for the therapy sessions.
Our trip to Casper was uneventful but the return yesterday afternoon was not fun. A good old fashioned Wyoming blizzard hit and it was 200 miles of wind driven snow and temperatures falling to the single digits. It was 35-40MPH of white nuckle driving for my wife. Needless to say it was a long trip.
A side story:
JonRobinett, husband of Deb Robinett who does the amazing wildlife photography in our gallery,who is the ranch manager of a ranch NW of Dubois was relating my heel problem with an old rancher in southern Wyoming near where he was working at the time. It seems this fellow had an injury not unlike mine but thought that cast was hindering him from doing his ranch work so with a hammer and chisel he got the cast off only to discover the pins that stuck out from his heel in various directions. Now this really hindered him and he set off trying to remove them. When Jon came by he asked Jon if he would with the vise grips pull those suckers out as everytime this old timer tried it he would faint. Jon set out to explain to him that they were actually screwed into his bone and no way would they come out by pulling them. I don't think the Doc was too happy with our "hero" cowboy. Can you imagine?
Posted by Gary Keimig at 12:02 PM 10 comments: