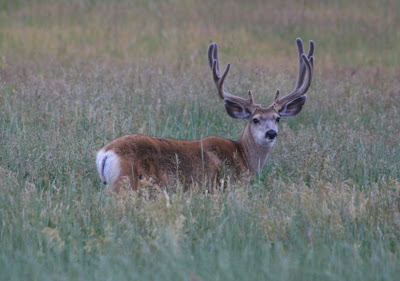 I have been trying to get a descent photograph of this monster Mule Deer Buck for about a week and this morning I succeeded by getting some 20 shots. After watching him and several other bucks that were dwarfed standing nearby I continued on down the road turning off on Brent Creek Road. Turning a bend in the one lane dirt road I jumped a large Black Bear but he[she]was off faster than I could even think to grab my camera. I watched him for several seconds going seemingly straight up through the timber and dissapearing. Boy was he fast. What a great morning. All this and home for breakfast by 7:30 A M
Posted by Gary Keimig at 11:57 AM 11 comments: