In the past several months I have received a lot of publicity which is sure a blessing for a poor starving artist such as myself. Last week I received a call from the Casper Star Tribune which is considered to be the state of Wyomings newspaper. They had picked up my blog and wanted to do a story on the concept of doing a painting-a-day or at least close to doing one. I was interviewed and the story was printed in the sunday paper this past weekend. How fun is that? I have gotten a lot of calls from the story so it was well worth it.
I realize it is hard to read from this posting until one clicks on the post and thus enlarging it.
gkeimig@dteworld.com
Posted by Gary Keimig at 11:57 AM 10 comments: Links to this post 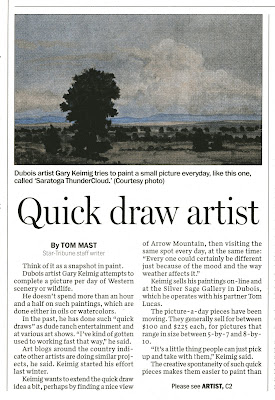