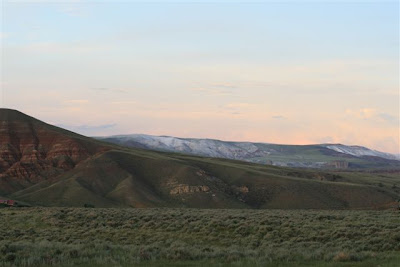 After a busy 4th and befor the fireworks begin at dark I drove up the hill west and above town to get a look at the hail that had fallen across the Badlands and on NE of Dubois where we heard [later confirmed] that the whole East Fork road system is no more. Quite a cloudburst. Dubois was just on the edge of the storm and I heard from several folks who say hail is still piled up east of Dubois along the hiway 2-3" deep this afternoon.
Posted by Gary Keimig at 3:37 PM No comments: Links to this post 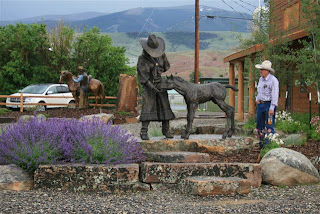 My pardner, Tom Lucas looking over the bronzes and the sculture gardens. Quite and addition to the fast growing art mecca of Dubois.
Posted by Gary Keimig at 3:33 PM No comments: Links to this post 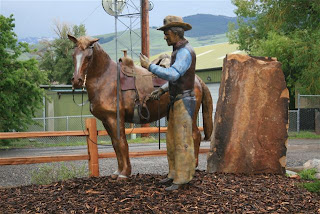 Buds bronze, the old time Cowboy depicting a late 1800's cowboy looking over an indian spearpoint he has dismonted to pick up and get a closer look at. As I mentioned it is the face of Butch Cassidy who had a small ranch here in Dubois befor hitting the Outlaw Trail. Bud's grand father actually rode with him and ran a horse ranch east of here for outlaw get aways.
In the first day after the 4th and the unveiling it is amazing to see how many folks are wandering through the flower garden and looking over these bronzes.
Posted by Gary Keimig at 3:27 PM 1 comment: Links to this post 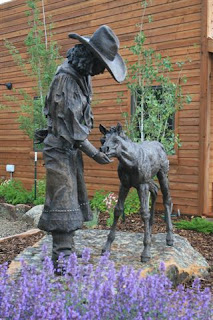 After a fantastic parade as only a small out of the way little western town can do. Only one horse wreck and fast ending because of a sudden down pour, my pardner, Tom Lucas and I walked across the street for a better look at the bronzes and to get some good pictures of them.

John Phelps bronze. John is best known world wide as the father of Chance Phelps from the recently filmed HBO movie, TAKING CHANCE. An awful way to be remembered. This is a great piece. The cowgirl is actually holding an apple in the one hand behind her back. The bronze is designed in such a way as the public[children]is encouraged to sit on the colt and have their picture taken. 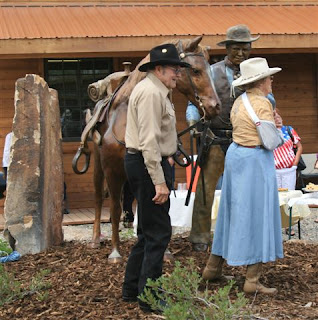 Silver Sage Gallery pardner, Bud Boller is presenting his Bronze depicting the old Time Cowboy who has dismonted and looking over a Spearpoint he has found. All depicting first time residents to the Wind River valley confronting the ancient culture so prevalent in our area.
Posted by Gary Keimig at 6:48 AM 1 comment: Links to this post Yesterday being the 4th of July in Dubois it was very busy for the gallery and town. At noon was the unveiling of the 2 bronzes in the town sculture gardens across from the Silver Sage Gallery.
After several speeches from several folks on the town history and the meaning of the ronzes, John Phelps bronze was unveiled and here he poses with Leota Didier who was so instrumental in seeing this project accomplished.
John's bronze was depicting women and their western heritage and contribution to the area history. A 1930's cowgirl is feeding a colt an apple.
Posted by Gary Keimig at 6:43 AM No comments: Links to this post 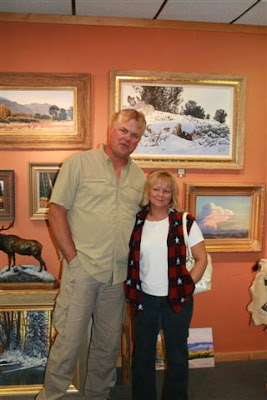 Just had to post this picture of my daughter, Kim with her husband Harry Leseberg. Yep. He is 6foot 7 and Kim is 5foot 3. They surprised us by coming to Dubois from Pine Haven[near Devils Tower area of Wyoming]the other evening and stayed into the 4th of July.

Posted by Gary Keimig at 6:40 AM 2 comments: Links to this post