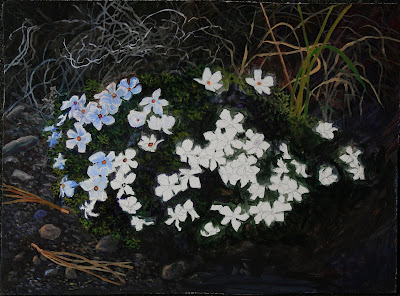 I have begun this painting 12"x16" on gessoed Masonite based on some photographs I recently took of Wild Phlox, one of our first wildflowers of the season now blooming on prairie and mountainslopes. Still determined to figure out acrylic painting I began this with an underpainting of acrylic and am now working oil into it. After two days of working while sitting at the gallery with interuptions from visitors this is where I stand.
I did take off sunday about noon for Riverton to do the promised painting for the state PBS Television fund raiser. Didn't really know what to expect but it tunrned out to be a blast. We left in a blinding snow storm. Yep. Snow. And it was pretty heavy snow for about 30 miles then heavy rain rest of the way [75 miles]The event began at 5:00 pm and I began a 15"x20" Gouache watercolor painting using a #1 illustration board as a surface. One of the T V people started the auction at $225.00 to get things going. After about an hour of painting a few bids were being phoned in and was up to $500.00. Mostly by folks I knew from around Wyoming. Several hours into the program it picked up a litle and by 9:00 pm I put the mat and frame around it so folks would know what they were getting into. Bidding really jumped then and finally went for $1125.00. A lady from Powell, Wyoming was the high bidder. The painting was of a summer Aspen Grove with early morning light hitting the main focus aspens. During an interesting program being aired on the Overland Trail they would periodically break and give a speil on their fund raising and show me painting and interviewing me as we went.[got a few plugs in on our gallery]The interviewer made a comment that There should be some deer in the painting but they were scared off so by next break I had put in a doe and fawn. I think that helped in the bidding too. They were happy and I had a great time. We even got a paid for room at the Holiday Inn so it was even more fun playing tourist. Heading for home on monday morning we once again ran into snow in Dubois. Will it ever quit?

Posted by Gary Keimig at 10:11 AM 9 comments: Links to this post