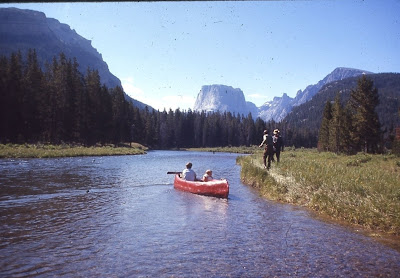 Today was my fathers birthday. He passed away in 1993 of cancer. His life was filled with work and adventure. He was definitely a Jack of all trades. I am sure he is where I get my sense of adventure and just having to know what is over the next hill. This picture is so typical of him. He built his own canoe and had so many coats of fiberglass that it was unsinkable and water tight. He fashioned the bar across the back for a 5 hp motor. One of his favorite places was the Green River, tributary of the Colorado River that begins in the northern Wind River Mountains of Wyoming and just south of Dubois, Wyoming. In this scene from an old slide I had taken he is lining his canoe up the River between Lower Green River and Upper Green River Lake. Motors are allowed on the lower lake so he would use it that far then stash it in the brush and continue on by lining the canoe up to the second Lake. He actually paddled and lined it way beyond that. It was great to canoe down the river then. That is what we are doing in this pix. My wife, Vicki and oldest daughter, Kim, who was 4 at the time are taking advantage of Dads work. A friend of his is along for the trip. I remember on one occassion going up river with him when the Outward Bound students who had just been dropped off for their sojourne in the mountains with canoes passed us on the Lake only to get bogged down when they hit the river between the two lakes. They didn't have a clue how to handle their canoes. Dad taught them how and away they went.
HAPPY BIRTHDAY, DAD.

Posted by Gary Keimig at 10:26 AM No comments: Links to this post