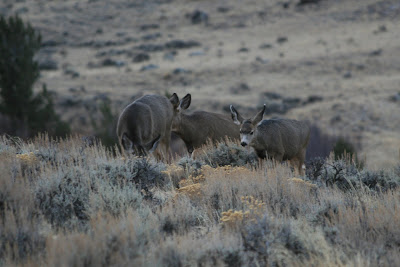 It was a very windy day and a high overcast sky lent itself to being almost dismal except for the sheep and many deer. Was surprised that I did not find any Bucks but probably 100 does and fawns scattered throughout the area.
Posted by Gary Keimig at 8:40 AM No comments: Links to this post 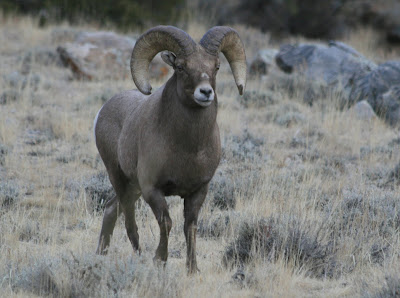 This is the spetacular season when the Bighorn Rams battle and vie for position in the Bighorn Sheep world. I spent the other morning watching some of the posturing and behavioral patterns of these beautiful critters. This was by far the largest and oldest Ram in the bunch and there was no fighting going on as it was no question as far as how 3 other small rams matched up. It was interesting and fun though to watch how they all interzacted with one another. They and 8 ewes and lambs were on a natural salt lick south of Dubois[this is the largest Bighorn Sheep herd in the world] I shot a large number of photos which will work great for future paintings. After I left several friends of mine were in the area and hiked up on the rim where they encountered a large number of sheep and watched a lone wolf. Early in the morning I found a Doe Mule deer carcass being worked on by natures garbage detail[Ravens and Magpies]I speculated on just what might have happened and a wolf kill is an entirely plausable explanation.??
Posted by Gary Keimig at 8:25 AM 2 comments: Links to this post