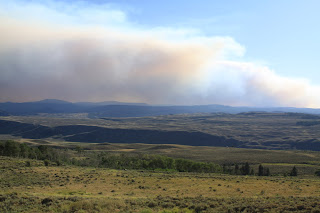 The Red Rock fire in the Gros Ventre[pronounced gro vont]wilderness has inundated our town with heavy smoke now for the third day.  Visibility is pretty bad down the streets of town and sure smells of wood smoke.  Ash is falling at times pretty heavily.  I took this photo last night [August 23]from the DuNoir valley high up and to the west of town.
Posted by Gary Keimig at 9:17 AM

These kinds of events just absolutely turn my stomach with fretting the losses to nature. I hope it is contained soon, Gary.

Safe is definitely the word here. This and the fire north of town are being allowed to burn and they are good fires Sherry as there is so much dead timber from the Pine Beetle that it will really help clean things up. And contrary to popular thought fires burn very mosaically and that creates great wildlife habitat with meadows for wildlife.

You are so correct about wildfires Gary. Having experienced two of the largest fires in the Southwest here in Arizona this decade, one just this past June/July, you can see the resulting regrowth in the forests that were cleaned by the fires. Although both of these fires were man-caused they still had a cleansing effect on the forest and the wildlife just as a natural caused fire does. The hundred years or so that forest fires have been suppressed and not allowed to burn out dead fuel causes these huge devastations when they erupt. Alpine regions that have large aspen growth have an amazing ability to come back quickly as the fire gives life to aspen regrowth. I was surprised you mentioned the Pine Beetle as I had no idea it had also infected the forest that far north of us. Hope all stay safe and remember that nature has a course of self rejuvenation and if we manage it and coexist without harming the habitat any more than possible we'll all live to see the great forests of the West for a very long time.

Wow, looks worse in this photo. Makes sense about allowing it to burn.

I hope everyone is ok and that the natural world will be safe too. It looks such a massive fire I am so glad the two homes were saved from the fire. You live along side the extremes of nature, snow,then fear of floods and now fires!